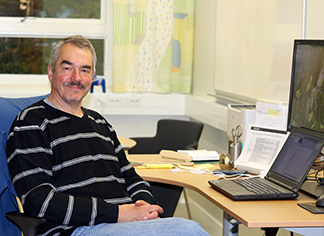 We are interested in understanding and using the dynamic behavior of signal transduction pathways. For this we integrate experimental studies with mathematical modelling and prediction. We use the yeast Saccharomyces cerevisiae as experimental organism. Our research has focused on the HOG signaling pathway, that controls adaptation to osmotic stress, and the AMPK/SNF1 pathway, which controls cellular energy homeostasis. In recent years we have increasingly employed studies in single living cells to capture signaling dynamics. Signaling circuits are useful tools for cell engineering and programming and we have demonstrated recently how such circuits can be engineered or reconstructed.

2015 – present: Professor and Head of Department at the Department of Biology and Biological Engineering, Chalmers University of Technology, Göteborg, Sweden.

2001 – 2015: Professor in Molecular Microbial Physiology at the Department of Chemistry and Molecular Biology, University of Gothenburg.

1999 – 2005: Research professor of the Swedish Research Council at the Department of Cell and Molecular Biology / Microbiology, University of Gothenburg.

1996 – 1999: Associate professor at the Department of Cell and Molecular Biology / Microbiology, University of Gothenburg (60% part-time) and project leader at the KU Leuven (40% part-time).

1991 and 1993 (three months each): Visiting professor at the Institute of Microbiology and Biochemistry, University of the Orange Free State, Bloemfontein, South Africa (head: Prof. BA Prior).

1986 - 1990: Post-doctoral researcher at the Institute of Microbiology, Technische Hochschule Darmstadt.

1984 – 1987: PhD student at the Institute of Microbiology, Technische Hochschule Darmstadt.

“Molecular Biology and Physiology of Water and Solute Transport” in 2000, Göteborg, Sweden. Number of participants: 200.